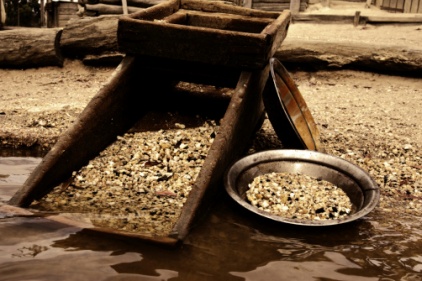 An international team of researchers has found a 25% mortality rate among children in Nigerian villages where their parents process gold ore in the family home.

In a report published online this week in the journal Environmental Health Perspectives, experts from the U.S. Centers for Disease Control and Prevention (CDC) presented data from two Nigerian communities showing that 118 children under the age of five had died in a single year. The researchers uncovered evidence implicating lead poisoning in the deaths. Extensive environmental contamination was found both in the villages and in individual family compounds.

“To our knowledge, this is the first documentation of an outbreak of childhood lead poisoning associated with artisanal gold mining,” according to the report.

Many families in poor, rural communities in Nigeria subsist on artisanal gold mining that uses crude processes -- including grinding and heating the rock -- to extract gold from ore. Those, along with flour-grinding machines, pollute the air and soil with lead and mercury, both of which cause neurological problems in children. Approximately 85% of soil samples exceeded safe levels of lead.

The World Bank estimates that up to 20 million men, women and children are involved in artisanal mining, which takes places in dozens of developing countries, including those in Africa and South America.

Last year, Nigeria’s northern Zamfara state temporarily banned mining in the state as part of its emergency response to the outbreak of deaths. The ban was lifted in March.

United Nations, CDC and WHO experts are advocating safer techniques that include processing the gold outside of villages and using dust-dampening techniques.