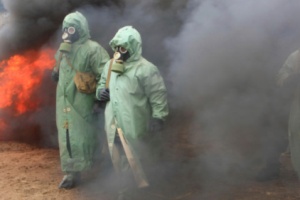 The ninth annual Ready or Not? Protecting the Public from Diseases, Disasters, and Bioterrorism report from the Trust for America's Health (TFAH) and Robert Wood Johnson Foundation (RWJF) identified what it says are at-risk emergency preparedness programs:

• 51 of the 72 cities in the Cities Readiness Initiative are at risk for elimination; the Initiative supports the ability to rapidly distribute and administer vaccines and medications during emergencies;
• All 10 state labs with "Level 1" chemical testing status are at risk for losing top level capabilities, which could leave the U.S. Centers for Disease Control and Prevention (CDC) with the only public health lab in the country with full ability to test for chemical terrorism and accidents;
• 24 states are at risk for losing the support of Career Epidemiology Field Officers - CDC experts who supplement state and local gaps to rapidly prevent and respond to outbreaks and disasters, such as during the H1N1 flu pandemic and responding to the health impact of the Gulf Oil Spill in 2010; and
• The ability for CDC to mount a comprehensive response to nuclear, radiologic and chemical threats as well as natural disasters is at risk due to potential cuts to the National Center for Environmental Health. All 50 states and Washington, D.C. would lose the support CDC provides during these emergencies.

"We're seeing a decade's worth of progress eroding in front of our eyes," said Jeff Levi, PhD, Executive Director of TFAH.  "Preparedness had been on an upward trajectory, but now some of the most elementary capabilities - including the ability to identify and contain outbreaks, provide vaccines and medications during emergencies, and treat people during mass traumas - are experiencing cuts in every state across the country."

Combined federal, state and local budget cuts mean public health departments can no longer sustain a number of basic elements of preparedness. In the past year, 40 states and Washington, D.C. cut state public health funds - with 29 of those states and D.C. cutting their budgets for a second year in a row and 15 states for three years in a row. Federal funds for state and local preparedness declined by 27 percent from fiscal year (FY) 2005 to 2011 (adjusted for inflation) - and the President's proposed budget for FY 2012 represents another $72 million in cuts for Public Health Emergency Preparedness (PHEP) funding.

"Americans expect the public health system to have the capability to competently protect their health during emergencies," according to Mel Kohn, MD, MPH, State Health Officer and Public Health Director of the Oregon Health Authority.  Kohn warned: "We will be unable to absorb reductions of this magnitude simply by finding efficiencies. We have reached the point where our ability to do this work will be seriously compromised, with life and death consequences."

"During the anthrax attacks and Hurricane Katrina, we witnessed what happens when public health doesn't have the technology, resources, workforce or training needed to respond to emergencies," said James S. Marks, Senior Vice President and Director of the Health Group of RWJF. "The old adage is that it's better to be safe than sorry.  Unfortunately if we ignore preparedness now, we'll be sorry later when the next emergency strikes."

• Assuring dedicated funding and strengthening the public health preparedness core capabilities;
• Improving biosurveillance to rapidly detect and track outbreaks or attacks;
• Improving research, development and manufacturing of vaccines and medications;
• Enhancing the ability to provide care for a mass influx of patients during emergencies;
• Providing better support to help communities cope with and recover from disasters; and
• Coordinating food safety with other preparedness efforts through the strategic implementation of the FDA Food Safety Modernization Act of 2011.