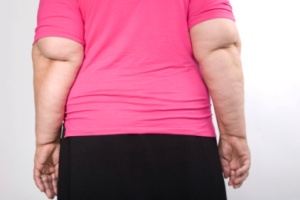 Add broken bones to the list of health problems that may be caused by obesity. That's according to a new study suggesting that obese older adults may at increased risk of suffering a potentially disabling fall -- this despite the fact that falls are often regarded as a problem for thin, frail older adults whose bones are especially prone to fracture.

The findings, reported in the Journal of the American Geriatrics Society, are based on 10,755 Americans age 65 and up who were surveyed every two years. Researchers Christine L. Himes and Sandra L. Reynolds found that obese older adults were 12 to 50 percent more likely to suffer a falls over a two-year period than were their normal-weight peers.

The researchers factored in health conditions that could contribute to both obesity and falling, like arthritis, leg pain, diabetes and stroke, but found that obesity itself was still linked to a higher fall risk.

In a surprising finding, the most obese adults -- those with a BMI of 40 or higher -- were one-third less likely to be injured than normal-weight people who fell. Moderately obese people were at greater risk of sustaining long-term disabilities from falls.

The report is available at: bit.ly/uuUlSa Journal of the American Geriatrics Society.