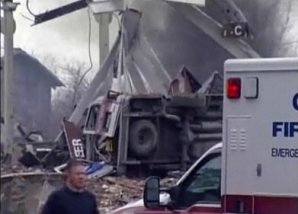 On this, the fifth anniversary of a propane explosion that killed four people in West Virginia, the Chemical Safety Board says satisfactory progress has been made in improving propane safety.

The accident at a convenience store in Ghent occurred as an inexperienced worker attempted to transfer propane from a tank located against an outside wall of the store. Two emergency responders and two propane technicians were killed in the incident. Four clerks inside the store and two other emergency technicians standing by outside the store, which had not been evacuated, were injured. The store was leveled.

CSB Chairman Rafael Moure-Eraso said CSB recommendations made in the wake of the tragedy aimed at improving training requirements for propane technicians, and improving emergency response actions by on-scene technicians and 911 operators have largely been adopted. He predict ed that the changes will result in lives saved.

The CSB’s final report found that a junior propane service technician was preparing to transfer propane, unsupervised, to a new tank from an old tank located near an outside wall of the store – a location that violated state and federal regulations. The technician removed a plug from the liquid withdrawal valve on the old tank, but the valve evidently malfunctioned, causing an uncontrollable release of propane. Propane entered the store through the restroom ventilation system. The technician had only 45 days of limited on-the-job training with his supervisor.

"We issued twelve recommendations to a total of nine recipients and most have resulted in what the Board determined to be 'Acceptable' action, or are being held as 'Open Acceptable' because they are on the brink of completion," said Moure-Eraso.

"It’s particularly gratifying to note that our recommendation to the National Fire Protection Association (NFPA) resulted in the issuing of a temporary standard providing guidance for personnel who work with liquefied petroleum gas. This includes training with a defined curriculum and testing, actions which resulted in an 'Open Acceptable” status determination in April 2011.'"

He urged the NFPA to permanently adopt the training and testing requirements for individuals who work with propane.

The CSB's recommendation to the governor and legislature of West Virginia – dealing with training and qualification requirements of propane workers – was closed as 'Acceptable' in August 2010 when the State Fire Marshal’s Office reported that the state fire code was updated earlier that year. Moure-Erase said the action should serve as an example for other states.

Among the Board's recommendations which were adoopted:

• That the Association of Public Safety Communications Officials develop a guide card for propane emergencies to assist 911 operators.

• That Ferrellgas establish and implement a comprehensive safety management system, as the company has improved its inspection and auditing program to detect and correct safety deficiencies. For many years, Ferrellgas owned and serviced the existing tank, which had been installed in 1994 by another company directly next to the store’s exterior back wall, in violation of West Virginia and U.S. Occupational Safety and Health Administration regulations."

A recommendation to the Propane Education and Research Council – to revise its Certified Employee Training Program is still pending. Changes would include, among other things, guidance to emergency responders, and procedures for, or a prohibition on, transferring liquid propane from tank to tank.

Eraso-Moure said the CSB was disappointed that the West Virginia Office of Emergency Medical Services has declined to require annual hazardous materials response refresher training for all emergency medical personnel in West Virginia -- which currently only occurs every two years.

A similar recommendation to the West Virginia Fire Commission has also not been acted upon.

To View the CSBs Safety Video on the accident, “Half an Hour to Tragedy,” click here.