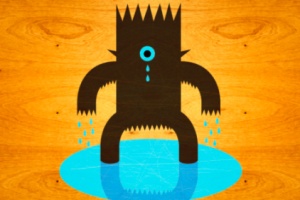 Have you ever had a conversation with a person who vehemently believes in Big Foot? Just to let you know, I’m not a Big Foot believer

Big Foot believers lean on evidence of the North-American man-ape’s supposed-real tracks and fur as well as grainy photos and blurry videos, most of which appear to be fabricated to me. But believers swear by this evidence and also tout the testimony of other believers as more evidence!

Yet why haven’t we managed to capture one of these giant, up-right-ape-like creatures? Believers will tell you that, “they’re shy and reclusive.” Then why do they keep popping up in grainy photos around where people are? It all doesn’t make sense and leaves me wondering.

I’m pretty sure I’m not the only Big Foot skeptic out there. I just want to see real proof before I jump on the side of the believers.

I feel the same way about Big Foot that I do about management that say they are committed to safety but their actions reveal otherwise.

Where’s the real proof of the commitment from top leaders? Is the safety commitment only captured verbally in meetings or on signs posted? Before I become a believer, I want to see that commitment in action!

Early on in my safety career, I worked for a Plant Manager by the name of Walt that, in my opinion, was truly committed to safety and his example shaped my view of how top leaders should commit to safety.

In fact, I thought all Plant Managers took the lead in all safety meetings, constantly lecturing people to be safe and, in emergencies, grabbed megaphones and reminded people to do things the safe way. Walt completed daily safety inspections, participated in incident investigations and verified people were safety trained. I once saw Walt get teary-eyed reporting news about a fatality at a neighboring plant.

So, how did Walt’s plant perform safety wise?

I don’t remember any serious incidents at the plant while working for Walt. I do, however, remember safety issues that Walt demanded everyone rally around to resolve. Hazards were taken care of swiftly under Walt’s leadership. Walt’s safety leadership did not amount to suspect footprints or blurry videos. No way! His commitment was visible, clear and obvious to all. There was no question: Walt lived safety and expected everyone else to follow his example, and that was clearly captured by all!

Was I in for a surprise after I was transferred to a new facility with a new plant manager!

I’ll call my new boss Chester.  I was over Safety and Security at this plant. Chester told me that his plant was 100% committed to safety. “Naturally,” I thought thinking back to Walt.

To my dismay, I never did see Chester in any safety meetings or conducting safety inspections like Walt did. Chester often asked me about safety-related issues but was never present for machine start-up-safety-walk-throughs or participated in incident investigations.

This plant had a lot of safety incidences, and I remember directing and reviewing endless investigations and reporting back to Chester what went wrong. He listened closely and showed concern but not much else. I know Chester occasionally walked the floor, but I only heard vague reports he engaged employees in safety discussions. Bottom line: Chester’s outward safety behaviors were quite reclusive and evidence of his safety commitment was a bit grainy at best. Chester was a safety leadership Big Foot.

Don’t get me wrong about Chester! He, indeed, was a very impressive leader, and I learned a ton working for him. He just wasn’t focused on safety as much as other things like inventory, quality and profitability: all good things to focus on but, in today’s brutally competitive, high stakes manufacturing game where tiny mistakes lead to grave consequences, safety must be the focus for leaders at the top.

Factories that struggle with safety often also deal with debilitating employee relations issues, cost control challenges with rising workers compensation premiums and crippling down time due to unforeseen, damaging events. Not to mention bad PR (think of the BP oil-leak catastrophe in the Gulf)... Plant managers and other top leaders that make safety leadership action part of their daily activities tend to grab control of employee relations, cost and unplanned events at the same time they control safety. This type of safety leadership action you can tag, track and place in a zoo for all to admire!

Admittedly, I would love to see Big Foot and know he/she/it is real. I might never go camping again but the knowledge that a creature like that is alive in the woods would be totally awesome!

Similarly, I would love to see all these highly intelligent, super capable leaders grab control of safety through action and leadership and know that one that ascends to that level means that without question, there will be an action-oriented safety commitment. It really can’t be said too often or emphasized enough just how important outward expressions of management commitment to safety are to the success of organizations.

So, for all you leaders out there, don’t be an elusive safety Big Foot! Let your actions reveal your commitment to safety and your leadership set the safety tone for all that work for you. You can do it and once you establish control, we can begin to tackle the mystery of the Loch Ness Monster or what I like to call the ever-mysterious, employee-involvement-in-safety creature.

Till next time - live safety!

Loose is MAU Safety Manager. A Safety Professional with Manufacturing, HR and Health Care management experience, Rob has worked for MAU since 2006 supporting both HR and operations functions. A 1998 graduate of Brigham Young University in Provo, UT, Rob now calls North Augusta, SC home where he lives with his wife, two kids and dog.  He is proud to work for a company that values the health and safety of clients and employees alike.