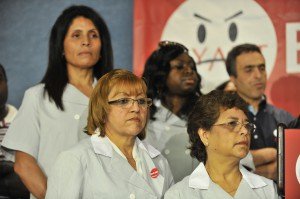 Safety in the workplace is one of the key issues behind a global boycott that has been launched against Hyatt Hotels – by a coalition that includes an unlikely assortment of organizations. The NFL Players Association, AFL-CIO, National Organization for Women, LGBT groups and others are joining Hyatt housekeepers in the protest, which is being promoted by Unite Here.

“Hyatt has singled itself out as the worst hotel employer in America,” said John Wilhelm, president of Unite Here. Wilhelm charged the hotel chain with, among other things, imposing dangerous workloads on its housekeepers. “Hyatt systematically abuses housekeepers and other hotel workers, and it is unacceptable in 2012 that women endure debilitating injuries as a result of the work they do cleaning rooms.”

Wilhelm called on the company to adopt the recommendations made by the federal government to reduce the physical strain associated with housekeeping work.

Hyatt called the boycott “a publicity stunt,” pointing to a 2012 Gallup Great Workplace Award based on independent surveys of its workers, including housekeepers. Additionally, Hyatt Hotels have made Best Places to Work lists in Baltimore, Chicago, Denver and San Francisco.

“Unite Here’s claims are an attempt to boost membership by pressuring Hyatt to allow the union to organize more hotels through the intimidating “card-check” process,” according to a statement issued by Hyatt. “We believe our associates have the right to a secret ballot. Last year, we petitioned the National Labor Relations Board to hold supervised secret-ballot elections at our non-union hotels. The union flatly refused to participate."

OSHA issued a formal Hazard Alert Letter to Hyatt Hotels in May of this year, notifying the company of ergonomic risk factors faced by housekeepers in the course of their daily work and recommending steps for the company to take to reduce the ergonomic strain of housekeeping labor.

The Hazard notice followed a year-long investigation process of Hyatt properties nationwide led by OSHA, instigated by injury complaints that were filed by housekeepers in 2010 on behalf of 3,500 Hyatt workers in eight U.S. cities, like Chicago, San Antonio and Indianapolis. The landmark multi-city filing of complaints was the first of its kind in the private sector. Since that time, OSHA and its state counterparts have issued 18 citations against Hyatt and 3 citations against one of its subcontractors, proposing combined fines of over $118,000 for alleged violations of various safety regulations protecting housekeepers and other hotel workers. Hyatt has appealed and in some cases settled the citations against it. In addition, State OSHA plans in California and Hawaii have issued similar ergonomic hazard notices to Hyatt properties in those states.

Hyatt said the global boycott will have a negative impact on the housekeepers and other workers, who depend on business in their hotels for their livelihoods.

The launch of the boycott is being accompanied by a week of demonstrations at Hyatt Hotels and other actions in 20 U.S. cities, including Los Angeles, Honolulu, San Francisco, Chicago, Baltimore, Indianapolis and Boston.