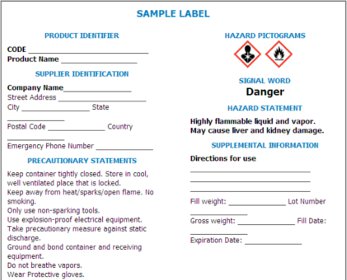 A 2011 release of chlorine gas at a Tyson Foods poultry processing plant in Arkansas occurred because a Spanish-speaking worker did not understand the English labeling on a drum he was using, according to a report from the National Institute of Occupational Safety and Health (NIOSH).

The worker inadvertantly poured sodium hypochlorite into a 55-gallon drum that contained residual acidic antimicrobial solution, causing greenish-yellow chlorine gas to be released into the small room where the drum was located and then into the plant, where approximately 600 workers were present.

These workers were evacuated.

The worker who accidentally mixed the two solutions indicated that the drum told investigators that the drum was labeled in English but he could only read Spanish.

Following the gas release, OSHA cited the company for violating its Hazard Communication Standard. OSHA's revised standard aligns with the Globally Harmonized System for the Labeling and Classification of Chemicals and makes workplaces safer by providing easily understandable information on appropriate handling and safe use of hazardous chemicals. For more information, read the full text of the report.

“This incident underscores the danger posed by chlorine gas and the importance of employers providing adequate training and communication of health and safety precautions to employees,” according to a statement by OSHA.