The science of sound: How Seattle got so loud 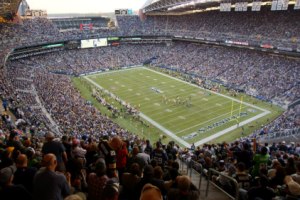 In week 2 of the NFL season, fans at CenturyLink Field in Seattle broke the Guinness World Record for the highest peak decibel level — 136.6 decibels — ever recorded at a stadium.

Since Seattle’s stadium opened in 2002, its raucous fan base, dubbed the 12th Man, has given opponents fits. Players have trouble hearing the quarterback’s instructions, which can cause delay-of-game penalties and generally throw an offense out of sync. The noise clearly bugged the San Francisco 49ers. Seattle walloped the defending NFC champs on Sunday night, 29-3.

While the vocal cords of Seahawks fans surely deserve credit for piercing ears, so do the designers of CenturyLink Field. Even though it’s a mostly open-air stadium, the building traps noise. While CenturyLink Field isn’t domed, two huge canopies — one on the east side of the stadium, the other on the west side — cover 70% of the seats. This design has two benefits. One, it protects fans from Seattle’s famous rain. And two, it pumps up the volume.

“The main thing that creates noise is any type of overhanging structure that reflects sounds back into the stadium,” says Andrew Barnard, a research associate at Penn State‘s Applied Research Laboratory, specializing in structural acoustics. What’s more, Seattle’s stadium has two additional overhangs, functioning as the bottom of the upper seating bowl, that cover the lower seating bowls. “Sound also reflects off the bottom of the upper deck, and back onto the field,” says Barnard.

The curves on these canopies are also key. “They are large parabolas,” says Bill Stewart, managing partner at SSA Acoustics, which is based in Seattle. Stewart was responsible for measuring the record-setting noise on Sunday night. “The curvature and angles of the canopies act to focus the sound energy onto the playing field, producing higher noise levels.”

These physics also change behavior. “Fans get caught up in it,” says Stewart. “They experience an intense increase in the sound levels that they would not normally experience in an outdoor environment, and are energized by it.” As a result, they scream even louder.

Over a decade ago, Seahawks owner Paul Allen told Jon Niemuth, the architect of CenturyLink Field, to model his team’s new home after Husky Stadium, home of the University of Washington. Allen wanted that crazed, college feel. So at CenturyLink field, the seats are relatively close to the field. In the north end zone, the design team created rows of aluminum bleachers. “When fans stomp on them,” Niemuth says, “things get really loud.”

Niemuth, however, did not anticipate the sound effects of the curved canopies. He calls this result a “happy accident.”

The NFL is known as a copycat league; if one tactic works, other teams start using it. But teams haven’t rushed to mimic Seattle’s stadium model. “Not every client starts at a place where they want world-record sound,” says Niemuth, whose firm — AECOM Ellerbe Becket — helped design Ford Field in Detroit, and renovate Soldier Field and Lambeau Field. Just look at some of the newer football stadiums, like Ford Field, Lucas Oil Field in Indianapolis, AT&T Stadium in Arlington, Texas, and MetLife Stadium in East Rutherford, N.J. They’re massive. But the seats aren’t on top of the players. They don’t scream like Seattle.