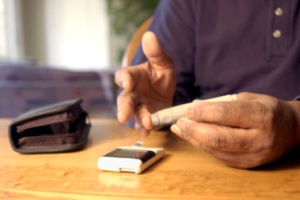 In recognition of November as National Diabetes Month, the American College of Occupational and Environmental Medicine (ACOEM) is urging employers to identify and respond to the impact of diabetes on worker health and productivity.

Diabetes affects nearly 26 million Americans. It is the seventh leading cause of death and the leading cause of kidney failure, new blindness in adults, and leg/foot amputations unrelated to injury. Diabetes is also a major cause of heart disease and stroke and its other complications include hypertension, periodontal disease, nervous system damage, pregnancy risks, and depression.

The total estimated cost of diabetes in the U.S. in 2007 was $174 billion. Indirect costs — disability, work loss, premature death — were $58 billion. However, employers and employees can take steps to prevent or control this disease which accounts for 15 million lost work days and 120 million work days with reduced performance per year.

“While the number of people with diabetes is on the rise, it is important to recognize that the majority of Type 2 diabetes is a preventable as well as treatable illness that can be well managed. In fact, diabetes is one of the most significant conditions affecting employee health and productivity — but through an emphasis on primary, secondary, and tertiary prevention interventions, employers can help reduce the burden of illness and empower a healthier, more engaged workforce,” said Ron Loeppke, MD, MPH, FACOEM, president of ACOEM and Chairman of the Diabetes at Work group, a free on-line resource specifically designed to address the management of diabetes in the workplace as part of the Center for Disease Control and Prevention (CDC) and the National Institutes of Health (NIH) National Diabetes Education Program.

Beyond a reactive approach

“Studies have demonstrated employers that commit to a culture of health and implement evidence-based workplace health and care management programs that engage workers to be more proactive about their health, can yield better health and lower health care costs,” said Dr. Loeppke. “We must move beyond our current reactive, illness-oriented sick care system toward a more proactive, wellness-oriented health care system built on the pillars of prevention.”

“This is an epidemic that is a major threat to our nation’s health and productivity. With the number of cases of diabetes estimated to affect 39 million Americans by 2050, we must support employer efforts to create a healthy workplace culture which encourages healthy lifestyles in order to prevent chronic and debilitating conditions such as diabetes,” said Pam Allweiss, MD, of the Centers for Disease Control and Prevention’s Division of Diabetes Translation, and co-chair of ACOEM’s Health and Productivity Section.

To promote National Diabetes Month, ACOEM is making available to members and the general public information on diabetes as well as resources for employers to learn more about diabetes prevention and maintenance programs in the workplace. A cornerstone of this initiative is the Blueprint for Health — a free on-line calculator introduced by ACOEM in 2007 in partnership with the HCMS Group and the National Business Coalition on Health, the Blueprint — that allows employers to enter demographic information on their employee population and receive information that calculates an overall health-related cost model for the employer as well as the impact of six specific chronic conditions such as diabetes and hypertension.

The Blueprint serves as the centerpiece of ACOEM’s chronic disease in the workplace awareness campaign. This informational campaign is the latest in ACOEM’s wide-ranging Healthy Workforce Now (HWN) initiative, which advances a new “national culture of health in the workplace,” better access to health care services for workers, a reduction in workplace health disparities, improvements aimed at the workers’ compensation system and a stronger national response to environmental health risks.

Other tools for employers and employees include materials found on the DiabetesAtWork.org site and CDC site, and the diabetes screening tool from the American Diabetes Association.