All about arc flash: definitions, dangers, stats, causes and prevention 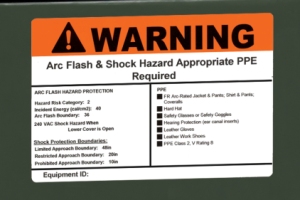 According to the National Fire Protection Association (NFPA), arc-flash is an electric current that passes through air when insulation or isolation between electrified conductors is no longer sufficient to withstand the applied voltage. The flash is immediate, but the result of these incidents can cause severe injury including burns. Each year more than 2,000 people are treated in burn centers with severe arc flash injuries.

Five (5) to ten (10) arc explosions occur in electric equipment every day in the United States, according to statistics compiled by CapSchell, Inc., a Chicago based research and consulting firm that specializes in preventing workplace injuries and deaths. This number doesn’t even include cases in which the victim is sent to an ordinary hospital or clinic for medical treatment. Instead, these incidents involve injuries so severe the victims require treatment from a special burn unit. Note that these are burn injuries, not electrical shocks. It is not necessary to touch live components to sustain an arc flash injury.

The flash protection boundary is an imaginary sphere that surrounds the potential arc point “within which a person could receive a second degree burn if an electrical arc flash were to occur,” according to NFPA70E. This standard also defines the incident energy level as “the amount of energy impressed on a surface, a certain distance from the source, generated during an electrical arc event.”

An arc flash may be caused by a tool, rodent or other element in a breaker or service area, that could compromise the distance between energized components. Incidents often occur when personnel fails to ensure that the equipment has been properly de-energized.

The intense heat from arc causes a sudden expansion of air. This results in a blast with very high air pressure (lightning are natural arcs).

An arc flash can cause minor injuries, third degree burns and potential death as well as other injuries including blindness, hearing loss, nerve damage and cardiac arrest.

Fatal burns can occur when the victim is several feet from the arc. Serious burns are common at a distance of 10 feet. Staged tests have shown temperatures greater than 437°F (225°C) on the neck and hands of a person standing close to an arc blast.

Arcs spray droplets of molten metal at a high speed. Molten metal from an arc can be propelled for distances up to 10 feet. Blast shrapnel can penetrate the body.

Blast pressure waves have thrown workers across rooms and knocked them off ladders. Pressure on the chest can be higher then 2000 lbs/sq. ft.

Clothing can be ignited several feet away. Clothed areas can be burned more severely than exposed.

Arc flash analysis must be performed prior to allowing personnel to work on energized equipment. The analysis defines the flash protection boundary distance and the type of Personal Protection Equipment (PPE) required.

OSHA is an enforcer of safety practices in workplaces within the United States. OSHA 1910.132 (d) and 1926.28(a) states that the employer is responsible to assess the hazards in the work place, and to select, have and use correct PPE and document the assessment. The employer is required to conduct hazard assessment in accordance with 29CFR1910.132(d)(1). Employers who conduct the hazard/risk assessment, and select and require their employees to use PPE, as stated in the NFPA 70E standard, 2004 edition, are deemed in compliance with the Hazard Assessment and Equipment Selection OSHA Standard.