Tired of hearing about dangers of sitting?

Here’s what to do about it 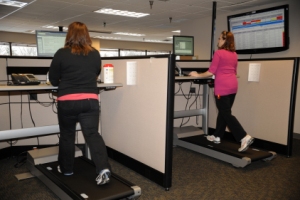 Sitting for long periods of time has emerged as a hot topic in occupational safety. It has been linked to an increased risk of high blood pressure, obesity and heart disease, and hitting the gym outside work hours does not seem to lessen those risks.

However, a study by researchers at Curtin University in Perth, Australia has identified three different strategies for reducing the amount of time people spend sitting at work – although they mainly work with employees who have flexible schedules.

"We were surprised by how difficult it was to reduce sedentary time and that no one approach seemed better than the other approaches," said Leon Straker, who worked on the study.

Remembering to actually do it

The easiest strategy for workers with desk jobs: get up every 30 minutes and take a short, active break, like walking to get a drink. The challenge, said Straker, is remembering to actually do it.

The active approach group had access to treadmill or cycling desks and received recommendations to use them for 10 to 30 minutes several times a day.

Light to moderate physical exercise – both on breaks and during off-work hours – was recommended for the traditional exercise group.

The third group had ergonomic workstations, broke up computer tasks and practiced "active sitting," which involves moving around more often and periodically perching on the edge of the chair.

The researchers found that each strategy only resulted in about eight fewer minutes sitting per day - a reduction in sedentary time of one to two percent.

"We expected the ‘Active office' approach to be more effective at reducing work time sedentariness - however organizations found it quite hard to implement the regular use of active workstations," Straker said.

A data processing office that participated in the study saw the greatest reduction in sitting time. Workers in that office had more scheduling flexibility.

The authors concluded that the techniques might work best for people with flexible working hours and self-monitored breaks.

Other health experts have suggested doing some work tasks – such as talking on the phone while standing or walking. Some kinds of meetings could even be conducted while walking.