Author’s note: This article is not intended to promote pro/anti medical marijuana, pro/anti recreational use or pro/anti substance abuse policies. Rather it is intended to give EHS professionals a “state of the nation” of current and forthcoming issues in the rapidly changing world of marijuana use.

Indeed all employers have the right to implement as strict a drug policy as they desire. Likewise, employees signing on with an organization know their responsibilities. The problem arises when the employee is doing something completely legal in the eyes of the state which does not impede their behavior or performance any more than having a glass of wine or beer the night before.

Are organizations stepping over their legal boundaries by having zero-tolerance marijuana policies? Can companies also step in and require no alcohol consumption while employees are on their own time?

These issues won’t be settled here; but hopefully we will encourage you to ponder the wide-ranging ramifications of legalized marijuana use.

There is no evidence indicating marijuana use the night before working causes workers to be less focused than alcohol users drinking the night before working. Still organizations remain concerned that legalization of medical or recreational use of marijuana may affect employees’ productivity, health care costs, quality of work and the safety of the employee and their coworkers.

The dichotomy where states (23) along with Washington, D.C., allow legal marijuana use either as medical treatment or for recreational use, while the federal government still sees the substance as illegal, is certainly a sticky point to maneuver through for EHS professionals. Federal workers and especially our military are placed in a difficult situation when the state they live in has a perfectly legal activity that is deemed illegal by the federal government.

In some states where marijuana has been legalized, many organizations continue to adhere to their zero-tolerance policies, penalizing employees for legal marijuana use during the employee’s non-work hours. Other companies have dropped marijuana from their drug testing protocol altogether. This head-to-head conflict between the federal view of marijuana and individual states’ views promotes lawsuits, ambiguity, and frustration on the part of employer and employee. 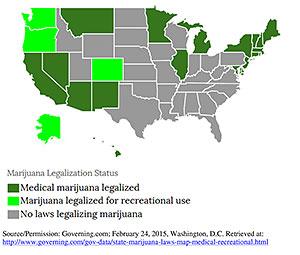 Recent studies have cited a 25-percent decrease in cases of overdose in pain management treatment when using marijuana versus traditional methods such as OxyContin, Vicodin and morphine. Post-treatment addiction is also being studied and initially marijuana appears to have similar favorable treatment results. For the less than 10 percent of medicinal marijuana treatment patients who do become addicted, there are far less dangerous side effects, including fatalities, than with previously mentioned treatment options.

FDA-approved research suggests that medical marijuana may effectively benefit or treat the following conditions: Cancer treatment symptoms; chronic long-term inflammation pain; increase appetite and ease neurological symptoms of HIV/AIDS patients; autoimmune disease such as arthritis; reduce pain from nerve damage in neurological disorders in spinal cord and multiple sclerosis patients. Most medical marijuana users say they need the drug for serious chronic pain. The opposing view would question if an employee who is having severe pain should be at work in the first place.

Various drug test methodologies are used to detect the use of cannabis for medicine, sports, employment and other legal situations. These include but are not limited to urinalysis, hair analysis and saliva tests and are sensitive to detection for days or weeks after use. Currently, cannabis testing is time-consuming and cannot determine an approximate degree of impairment. This lack of suitable tests and agreed-upon intoxication levels are an issue in the debate. Marijuana analysis concentrations can be helpful in distinguishing active use from passive exposure, elapsed time since use, and extent or duration of use. Many states have included specific employee protections making only on-the-job impairment or consumption of marijuana grounds for termination.

On the other hand, alcohol impairment can be reasonably measured using a breathalyzer and is commonly accepted by the employer as a recreational activity when responsible use away from work does not affect a person’s employment status.

Much of the debate over legalization of marijuana for medical treatment comes clearly to an impasse in the area of workers’ compensation claims. Say an employee in a medical marijuana state hurts his/her back, and the treating physician prescribes marijuana to lessen the pain. Companies with zero-tolerance marijuana policies may very well find themselves in a position of paying for doctor-prescribed marijuana. Further exacerbation of this dilemma is determining what drug testing is acceptable for that same worker coming back to full duty who days before was using legal marijuana, prescribed by the physician and paid for by the company.

The medical insurance aspect of legalized marijuana is no different. The best example is the case of employees who are receiving chemotherapy to treat cancer and are prescribed marijuana to increase appetite and lessen nausea. Terminating the employee in this situation will be especially fraught with legal uncertainty. The FDA’s acknowledgement that there is therapeutic value even in cases of arthritis and other chronic pain also places employers in a precarious situation. Pain management physicians now have a case for expanding treatment options to include marijuana. Or do they, if the physician is potentially limited to only those patients who are not working?

A groundbreaking case that speaks directly to this issue is the 2012 Cockrell v. Farmers Insurance Co. In this California case, a workers’ compensation judge awarded the worker reimbursement for the cost of medical marijuana prescribed in lieu of OxyContin. While this decision was eventually vacated, other cases like this are springing up in states where medical marijuana has been legalized.

As EHS professionals, we must be the gate keepers to informed stakeholders. We cannot allow our personal opinions to influence our fiduciary relationship with employees or employers to be skewed. Stay informed with facts, not hype.

Dan O'Brien is Director - Safety & Risk Management for Koontz Construction in San Antonio, Texas. He can be reached at DOBrien@koontzcorp.com