The opioid epidemic that is causing devastation in many communities in the U.S. may be being worsened by financial payments made by pharmaceutical companies to advocacy organizations that help people cope with chronic pain, according to a new report released by Missouri Democratic Sen. Claire McCaskill. Fueling an Epidemic: Exposing the Financial Ties Between Opioid Manufacturers and Third Party Advocacy Groups exposes the cozy financial relationships between the pharmaceutical industry and groups that assist pain sufferers.

McCaskill’s report reveals nearly $9 million in payments from these manufacturers to 14 outside groups working on chronic pain and other opioid-related issues between 2012 and 2017. Doctors also profited; physicians affiliated with these groups accepted more than $1.6 million in payments from Purdue Pharma L.P., Janssen Pharmaceuticals, Inc., Mylan N.V., Depomed,Inc., and Insys Therapeutics, Inc. between 2013 and the present. In total, the five manufacturers have made more than $10 million in payments to these groups and affiliated individuals since January 2012.

Positive messages about opioid use

And what did they get for their money? “Initiatives from the groups in this report often echoed and amplified messages favorable to increased opioid use,” according to the report, which goes on to note that the groups:

“Notably, a majority of these groups also strongly criticized 2016 guidelines from the Centers for Disease Control and Prevention (CDC) that recommended limits on opioid prescriptions for chronic pain — the first national standards for prescription opioids and a key federal response to the ongoing epidemic.” 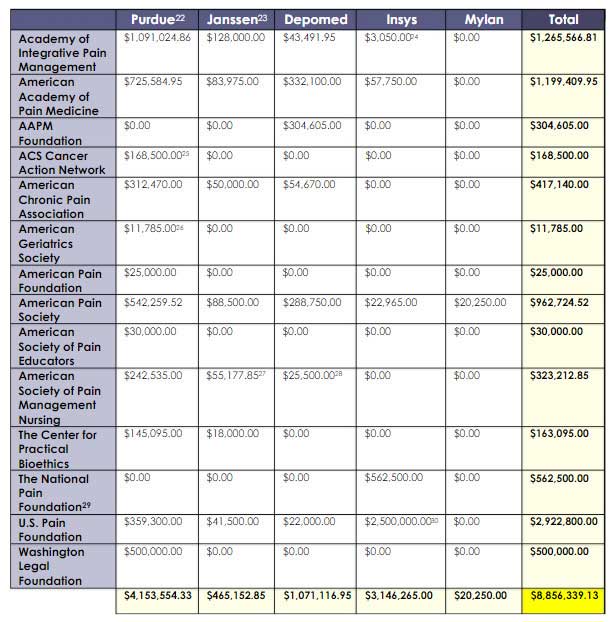 The report says the funding suggests, at the very least, a direct link between corporate “donations” and the pro-opioids messaging.

“By aligning medical culture with industry goals in this way, many of the groups described in this report may have played a significant role in creating the necessary conditions for the U.S. opioids epidemic.”

That health advocacy groups receive funding from the pharmaceutical industry is not new. A March 2017 New England Journal of Medicine report found that out of 104 organizations, “at least 83% received financial support from drug, device, and biotechnologies companies, and at least 39% have a current or former industry executive on the governing board.”

Moreover, only 12% of the organizations researchers examined “have published policies in place for managing institutional conflicts of interest.”

In response to the report, the U.S. Pain Foundation issued a statement saying that $2.5 of the $2.9 million received from the pharmaceutical industry over the last five years has gone toward a large copay assistance program for cancer patients dealing with pain.

"The program helps to cover the high costs of treatment; assistance is not limited to any specific type or brand of pain medication."

The foundation said the funding "does not influence our values. When it comes to opioids, we believe both that people with legitimate pain have a right to effective care and that systematic changes must be made to address the ongoing opioid crisis. As a patient advocacy organization, we support the discovery and development of safer, more effective pain treatments. We also support sensible reforms like prescription monitoring programs, more training for clinicians on screening for and treating chronic pain and substance use disorder, and limits on opioids for acute pain. The chronic pain and substance use disorder patient populations must work together on solutions like these.

The high cost of the epidemic

More than 42,000 Americans died from opioid overdoses in 2016, with deaths from natural and semisynthetic opioid painkillers like hydrocodone and oxycodone rising roughly 14% compared to 2015. Fatal overdoses from fentanyl and other synthetic opioids more than doubled in the U.S. between 2015 and 2016 —“more than an exponential increase,” according to the chief of the mortality statistics branch at the National Center for Health Statistics.

This surge in overdose deaths resulted in the first two-year drop in average U.S. life expectancy since the early 1960s.

The opioid epidemic in 2015 cost the US economy more than $500 billion, according to new report by the White House Council of Economic Advisers (CEA). The CEA analysis concluded that the opioid epidemic cost between $293.9 billion and $622.1 billion in 2015 .