Going public with your injury rates

If you work in safety in a high-hazard industry, would you be worried if your company injury and illness data sat on OSHA’s website to be accessed by the public?

There are two reasons why we ask these questions. One has to do with the tenor of the times. The other specifically relates to a recent regulatory action.

“We live in a time of unprecedented public dishonesty, blurring the lines between fact, opinion and noisy speculation,” wrote Stephen Gold, president and CEO of the Manufacturers Alliance for Productivity and Innovation, in an Industry Week essay.

Safety and health professionals can help business transparency and how businesses communicate to the public. Accurate and honest injury and illness recordkeeping is a building block for a culture of trust – both inside and outside the company gates.

Here’s the second reason how safety and health data is reported is timely: on July 30th of this year, OSHA proposed to rescind certain electronic recordkeeping reporting requirements. The “e-recordkeeping” rule has been controversial since the Obama Labor Department issued it on May 12th, 2016. The major requirements of Obama OSHA rule:

Specific data to be made public

Limited injury and illness data has long been public. At the end of each year, employers must prepare a summary report of all injuries and illnesses on the OSHA Form 300A and post the form in a visible location in the workplace. But the 2016 rule greatly expanded public notification. Form 300 provides additional details about each case recorded, but limits the disclosure of personally identifying information.

Form 301 requires employers to collect specific information about each injury or illness case, including how the injury occurred and what object or substance directly harmed the employee?

The agency has delayed electronic reporting deadlines several times, and has not made any of the information public on its website. The Trump administration proposes to rescind the requirement to send to OSHA Form 300 and Form 301 data, citing the need to protect employee privacy.

Some law firms and employer groups want OSHA to go further and drop the public notification of company injury rates. They argue that publicizing injury rates could hurt company reputations because rates are not indicative of the quality of a company’s safety and health program.

OSHA said in 2016 when issuing the “e-recordkeeping” rule that the rule did not ban “appropriate” (the agency’s language) disciplinary, incentive, or drug-testing programs.

Said one law firm in drumming up support for a broader recordkeeping rollback: “The tiny scope of this proposed change seeming ignores employers’ other concerns. The proposal falls far short of what industry was expecting. OSHA’s proposed change is a major disappointment.

“With the rulemaking record being re-opened, even if just a crack, we strongly recommend that industry seize the opportunity to push for broader revisions.”

OSHA will take comments on its proposal until September 28, 2018. According to one ex-high ranking OSHA official, any final rule most likely will not be issued until a permanent assistant secretary of labor for occupational safety and health is in place.

So a battle looms: advocates for recordkeeping transparency and “nudging” employers to raise their safety game by publicizing injury and illness data “in a competitive spirit” as OSHA puts it, versus those who claim the data will be misleading, misused, misunderstood, and more damaging than helpful.

Nudge, don’t shield: On one side you have people like safety veteran Phil LaDuke, who told ISHN: “The best way to preserve one’s reputation is to stop hurting workers. Why on earth should we shield companies from the fall out of their own negative actions?”

Adds ex-OSHA official Edward Stern: “Hiding the injury and illness rates prevents workers from knowing the risks they face. It’s like blindfolding the workers who are looking for employment.”

“Openness and transparency in recordkeeping is critically important to everyone – government entities, employers and their workers,’ says safety consultant David Sarkus.

Misleading the public: On the other side you have people like safety expert Flavio Simon, who told ISHN: “There are intrinsic and severe limitations when trying to evaluate the safety performance of a company based on OSHA Total Recordable Incident Rate (TRIR).”

Adds safety consultant Deb Grubbe: “I never saw the advantage of publishing companies’ safety performance for everyone to see. We have too many examples of injuries not being tallied for many ‘justifiable’ reasons. Do the number really carry the meaning we give them? No. Publicizing those stats is a very weak and superficial argument.”

Case in point: The aviation industry shares safety enhancements through the Commercial Aviation Safety Team (CAST), part of the Federal Aviation Administration. Airlines share data on precursors and contributing factors to approach and landing accidents, cargo-related accidents, and mid-air collisions, among other issues. But Chris Hart, former chair of the National Transportation Safety Board, who also worked for the FFA, told ISHN: “Before CAST, industry participants were reluctant to share their safety data with each other —much of it could be misleading if taken out of context. Therefore it’s not generally shared with the public. Making potentially misleading information public, and giving the pubic reason to think more negatively about the source of the information, tends to undermine the participants’ willingness to share the information even amongst themselves.”

Between the two sides sit the realists. “Most non-safety professionals have no clue regarding incident rates,” says longtime safety pro Mark Hansen. “I still have to explain it to senior management. It is not a measure of the safety program.”

“Injury rates are gobblygook to the lay person,” says LaDuke. “What does a 3.3 DART mean to the average job seeker or the average purchaser?”

“Some companies will spend thousands of dollars fighting publication of injury data,” says Larry Curtis, executive director of the Institute for Safety and Health Management (ISHM). Perhaps if they directed that money into safety they would not be so worried.”

Safety pros have long recognized the limitations of OSHA recordkeeping. Many companies use their own set of leading key performance indicators, such as hazards identified and mitigated, number of audits and training activities conducted, number of specific process safety improvements, ergonomic improvements, etc.

But there’s no uniformity among these companies. No consensus on what should be tracked, analyzed and reported. “I don’t believe incident rates are a measure of the safety program, but until something better comes along, it is what it is, and it is what we use,” says Mark Hansen.

Still, in this era of fake news, dishonest tweets, false stories, and the lightning fast spread of misinformation, there is more urgency than ever for the safety profession, industry and OSHA agree on injury and illness recordkeeping transparency and how to communicate performance measures to the public. 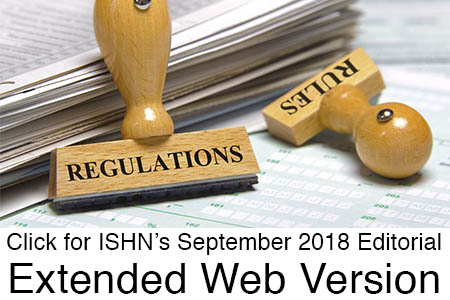