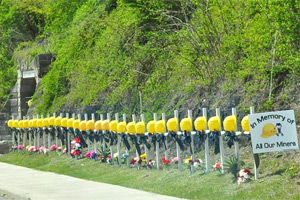 The United Mine Workers of America has released its investigation into the April 5, 2010 fatal explosion at Massey Energy’s Upper Big Branch Mine – South (UBB) in Montcoal, Raliegh County, West Virginia.

The miners at UBB were not represented by the UMWA, nor any other union.

Here are excerpts from the report’s Executive Summary:

“Clearly, workers at UBB were fearful, because of management intimidation, to report to anyone that the mine was unsafe. The threat of reprisal, including job loss, was so real the employees did not feel they could report hazardous conditions at the mind.

“It is not believable that management personnel were unaware of the general poor conditions at the mine, and these conditions posed a substantial and immediate hazard to the miners and could possibly escalate into a catastrophic event.

Massey kept two sets of record books. One set was for Massey’s eyes only, that documented the actual conditions. The other set was an official record that concealed the truth.

“Mine management had the ability to act and the responsibility for correcting all conditions, but because of the culture created by management at the highest levels of the company, management failed to correct many hazardous conditions.”

“There is evidence that the company's conduct interfered with the proper performance of mine health and safety laws and regulations to such an extreme extent that the union believes that government would be able to prosecute company representatives under applicable criminal provisions for their roles in permitting the dangerous conditions in the UBB mine that killed 29 miners.”