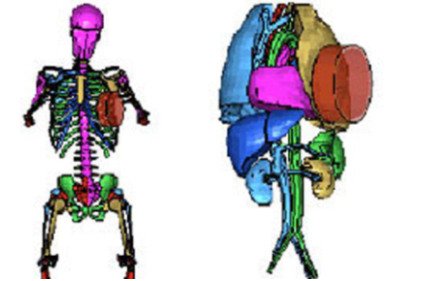 The Ford Motor Co. is developing digital human children with lifelike skeletal structures, internal organs and brains for use in virtual crash testing.

The company says that traffic crashes are the leading cause of death for people from age 4 to 34. “A child’s body is very different from an adult’s,” said Dr. Stephen Rouhana, senior technical leader for safety, Ford Research and Advanced Engineering. “We want to better understand how injuries to younger occupants may be different.”

Digital models are used in research, not in vehicle development. They don’t take the place of crash dummies, which measure the effect of forces on the body. Instead, they are used to improve restraint system effectiveness through better understanding of injury mechanisms.

“Building the model of a person is just like building a model of a car,” said Rouhana. “You start with your surface geometry for each component and any subcomponent it contains – in this case the geometry of the human body and its internal organs.”

The components are then joined into a virtual human body. Using mathematical and analytical tools combined with available data on the properties of human tissues from the medical and engineering literature, researchers are able to determine the effects of a crash – and the pressure of a restraint system – on the body.

The world’s first crash test dummy was conceived in 1949 for the U.S. Airforce. Codenamed Sierra Sam, it was designed to test jet fighter ejector seats.

Ford has been using conventional crash test dummies for the past seven decades. The current Hybrid III model has a spine made out of metal discs, a movable neck, a steel ribcage, vinyl skin, and knees that are designed to respond to impact like the human counterpart.