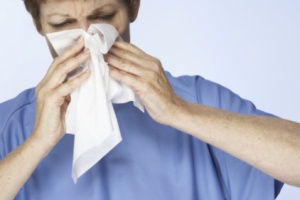 During flu season, when fever, aches, and chills hit, it is easy to forget one's manners. A recent survey of more than 1,000 Americans found that nearly two-thirds (64%) of those who had influenza in the past three years admit to being "That Guy," who despite experiencing flu symptoms, continues to go about his/her daily activities.

The survey found nearly four out of 10 Americans (37%) are uncomfortable telling "That Guy" that he/she is sick and should stay away from others. The Emily Post Institute recommends the following flu etiquette tips to handle common situations with social grace:

• In the workplace: If you have flu symptoms at work, let your boss know right away that you need to get to the doctor. Just let him or her know, "I don't feel well—I need to see a doctor. I think I might have the flu." Better to have others pitch in while you're gone than risk others on your team becoming sick.

• In social situations: Normally it would be rude to cancel on a dinner party or big event at the last minute, but if you're sick, call with your regrets and instead, go see your doctor.

• Air travel: It's tough to point out someone's behavior mid-flight with hours left to go. However, flu is highly contagious. If there's no other seat available, consider saying, "I can see you're not feeling well—would you mind covering your mouth when you cough? Thanks." Most people when prompted are eager to show good manners and do the right thing.

As part of its "Are You That Guy?" influenza education campaign, the National Foundation for Infectious Diseases (NFID) is partnering with the Emily Post Institute to remind Americans to do the responsible thing during flu season and practice behavior that will help limit the spread of influenza, a highly contagious virus.

The survey was conducted through ORC International's Online CARAVAN survey between October 10 and 12, 2011. The findings are based on a national sample of 1,044 consumers, 18 years of age or older. Responses were weighted by five variables including age, sex, geographic region, race and education to ensure reliable and accurate representation of the total U.S. population 18 years of age or older.