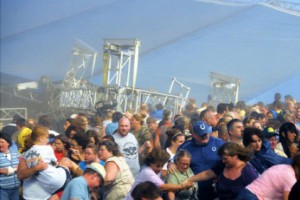 After a six month investigation, the Indiana Department of Labor announced it is citing three organizations involved in the Indiana State Fair accident on August 13, 2011 that resulted in fatal injuries two seven people, including two employees. The IOSHA investigation resulted in the following:

Commissioner Lori A. Torres was said evidence demonstrated that the Mid-America Sound Corporation was aware of the appropriate requirements and "demonstrated a plain indifference to complying with those requirements.”

She also criticized the State Fair Commission for failing to have conducted an adequate life safety evaluation and plan prior to the event. In addition, she noted that IATSE Local 30 clearly acted as an employer and failed to take proper safety precautions for employees and failed to take appropriate steps to ensure the load bearing roof was properly secured.