More of us are buckling up, survey shows 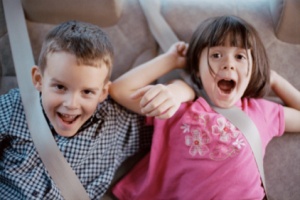 An overwhelming majority of the millions of families traveling our nation's highways this Thanksgiving weekend, one of the busiest travel times of the year, will be buckling up, according to new survey results released today by the National Highway Traffic Safety Administration (NHTSA). New NHTSA research shows that nationwide seat belt use reached an all-time high of 86 percent in 2012.

"When it comes to driving safely, one of the most effective ways to protect yourself and your family is to use a seat belt," said Transportation Secretary Ray LaHood. "This Thanksgiving holiday, we're urging everyone on our roadways to buckle up – every trip, every time."

According to NHTSA's annual National Occupant Protection Use Survey, seat belt use has steadily increased since 1994, with the record high of 86 percent in 2012 representing a two percent increase over the previous year. Among the most dramatic increases in seat belt use were in the southern region of the country, rising to 85 percent in 2012 — up from 80 percent in 2011. Seat belt use continues to be higher in states that have primary belt laws, which permit law enforcement officers to issue citations to motorists solely for not using a seat belt rather than requiring additional traffic violations.

"Thanks to the ongoing work of our state and local partners and national efforts such as 'Click it or Ticket,' we've made steady gains in belt use in recent years," said NHTSA Administrator David Strickland. "Moving forward, it will be critical to build on this success using a multi-faceted approach that combines good laws, effective enforcement, and public education and awareness."

Nationwide, 32 states and the District of Columbia have passed primary laws requiring seat belt use, while another 17 states have secondary laws on the books. New Hampshire is the only state that has not enacted either a primary or secondary seat belt law, though the state's primary child passenger safety law applies to all drivers and passengers under the age of 18.