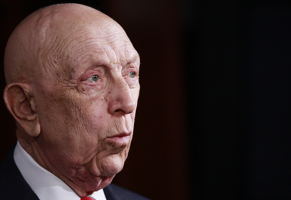 Sen. Frank Lautenberg, D-N.J., died Monday at the age of 89 from viral pneumonia. First elected to the Senate in 1982, Lautenberg was the oldest member of the Senate.

Lautenberg was a strong supporter of both workplace safety and environmental protection. He took a special interest in chemical safety, introducing – along with Senator Kirsten Gillibrand and 27 co-sponsors – the Safe Chemicals Act  (S. 696), “a bill that would put common sense limits on toxic chemicals,” according to the advocacy group Safety Chemicals, Health Families.

Lautenberg is known as the father of the U.S. Chemical Safety Board (CSB) – an agency he worked to establish, fund and sustain.

A reactive chemical explosion in 1995 in Lodi, New Jersey that fatally injured five workers occurred near where Lautenberg grew up – an event he referred to later, at a CSB public meeting on reactive chemical hazards:

“I was born just a few blocks from here, and I was able to witness, painfully and directly, what happens when working people are exposed to a dangerous environment …. And this city is a proud city,” said Lautenberg. “But what it needs to know, like the other industrial cities in this country, that when they go to work, that the only thing that they have to be concerned about is making the product, and getting out at the end of the day, and enjoying themselves, and enjoying their families.  And so the work you are doing is, frankly, essential.”

Commitment to worker and community safety

“I had the honor of meeting the Senator during my nomination process in 2010 and was moved by his fervent commitment to worker and community safety, and on the need to take the actions needed to prevent these terrible chemical accidents. Throughout my tenure as chairperson, he has been strongly supportive of the CSB’s work, and maintained an active interest in the board’s activities.”

Senate Majority Leader Harry Reid, D-Nev, said Lautenberg was “one of the most productive Senators” ever.

Lautenberg was the last remaining member of the Senate to have served in the military during World War II.