Not far enough away from the roaring crowd 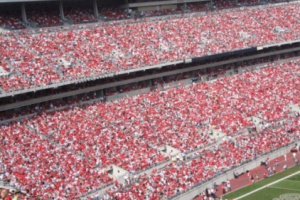 Weeks later, Kansas City Chiefs fans at Arrowhead Stadium upped the antie with 137.5 piercing decibels of their own.

Game-day noise isn’t just trying to get into the Guinness Book of World Records. Obvious hearing loss risks are involved. The decibel level of noise reaching a typical spectator averages in the mid-90s, but for a longer time.

Sustained noise is enough to cause permanent damage and to increase the likelihood of future damage.

Even if ears seem to recover after a rip-roaring game, they don’t really recover. It’s not just the tiny sensory cells in the cochlea that are damaged by noise, but also nerve fibers between the ears and the brain that degrade over time.

Extreme noise causes not just partial deafness, but tinnitus, or ringing in the ear, and hyperacusis, a sensitivity or intolerance to sound, sometimes with ear pain.

It is tough to separate the cumulative effects of a lifetime of recreational, environmental and workplace noise. Assessing noise risk is complicated, too, with an unpredictable interplay of volume, duration and susceptibility.

A sensory loss is hard to detect because people don’t know what they are not hearing. Over time, hearing only becomes worse.

Some people with tinnitus report more than just a ringing or buzzing — they suffer from swirling, oscillating, multitonal noises in their head sometimes accompanied by sensations of pressure. There is no treatment beyond coping strategies.

According to the American Tinnitus Association, around two million Americans are so debilitated by tinnitus that they cannot function on a day-to-day basis.

Unlike awareness of other health hazards, such as smoking and suntanning, awareness of harmful noise is minimal.

At a loud event — assuming someone has no pre-existing ear problems — ear damage is largely preventable with properly-worn earplugs or protective earmuffs.

Earplugs, though, might not be enough for people with already-injured ears.

A Harvard’s physician told The New York Times the increasing knowledge about disabling hearing loss consequences compares with “the rising consciousness about repeated concussions and brain damage” in football players, which may lead to dementia at an early age.

“You don’t notice it right way,” he said. “You shake it off and you think you have recovered, so you do it again. Changes in brain function add up slowly.”