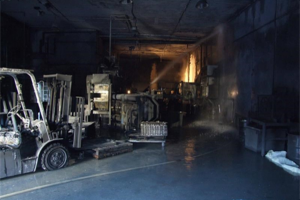 The accident at the facility that milled and processed scrap titanium and zirconium metal killed three employees and injured a contractor. The incident is one of nine serious combustible dust incidents investigated by the CSB since 2003. These explosions and fires caused 36 deaths and 128 injuries.

Even small amounts can be catastrophic

The CSB’s report notes that most solid organic materials, as well as many metals, will explode if the particles are small enough, and they are dispersed in a sufficient concentration within a confined area, near an ignition source, and it emphasizes to industry that even seemingly small amounts of accumulated combustible dust can cause catastrophic damage.

Company had a history of fires & fatalities

The CSB investigation determined that AL Solutions experienced a history of fatal dust fires and explosions. Investigator Mark Wingard explained, “The CSB learned that the AL Solutions facility had fatal fires and explosions involving metal dust in 1995 and 2006 in addition to the 2010 explosion. Also, from 1993 until the accident in 2010, there were at least seven fires that required responses from the local fire department.”

A newly developed CSB safety video entitled “Combustible Dust: Solutions Delayed” details the process of milling and blending metal powder at the facility which was then pressed into dense disk called “compacts.” The video includes a 3D computer generated animation which shows how the accident unfolded at the plant.

In presenting the findings of the case study, CSB Lead Investigator Johnnie Banks explained, “As the metals were broken down during milling, the risk of a metal dust fire or explosion increased as the metal particles decreased in size. At AL Solutions a metal blender used to process zirconium was having mechanical problems that had not been adequately repaired. As a result, the blender was producing heat or sparks due to metal-to-metal contact.”

Around 1:20 pm on December 9, 2010, a spark or hot-spot from the blender likely ignited the zirconium powder inside. The resulting flash fire lofted the metal dust particles in the blender, forming a burning metal dust cloud.

The cloud ignited other combustible dust within the production building, causing a secondary explosion that ripped through the plant, killing three workers and injuring a contract employee.

Investigator Mark Wingard said, “The National Fire Protection Association Standard for Combustible Metals, called NFPA 484, recommends specific practices for controlling metal dust, but AL Solutions did not voluntarily follow those guidelines, and there are no federal OSHA standards to enforce similar requirements.  In its 2006 Combustible Dust Hazard Study, the CSB recommended that OSHA issue a combustible dust standard for general industry based on the current NFPA guidelines.”

The CSB’s report and video encourage industry to take action to prevent combustible dust incidents.  In July 2013, the CSB identified its 2006 recommendation to develop a combustible dust standard as the first issue in its “Most Wanted Chemical Safety Improvement” outreach program.

As Chairperson Moure-Eraso says in thevideo, “Had a national standard for combustible dust been in place in 2006 – and if industry had followed the requirements – many of the severe dust incidents that followed, including AL Solutions, may have been prevented. The time is now for OSHA to take action to prevent these tragic accidents.”