Could your workers be suffering from obstructive sleep apnea?

By Brian Morris MD-JD-MBA
Untreated or inadequately treated obstructive sleep apnea (OSA) results in job performance deficiencies such as excessive sleepiness, cognitive dysfunction, longer reaction times, irritability and reduced vitality. According to the American Academy of Sleep Medicine, it is estimated that about 80 to 90 percent of U.S. adults with OSA remain undiagnosed. An individual working with or around dangerous machinery, who is impaired by OSA, presents a risk to himself or herself as well as to others.

What is obstructive sleep apnea?

OSA is a sleep disorder characterized by pauses in breathing (apneas) or instances of shallow breathing (hypopneas). Each pause in breathing can last from at least ten seconds to several minutes, and may occur five to 30 times or more an hour. Snoring is a common symptom of OSA but certainly everyone who snores does not necessarily have OSA and some individuals with OSA do not snore.

OSA can be thought of as a medical problem due to abnormal anatomy. 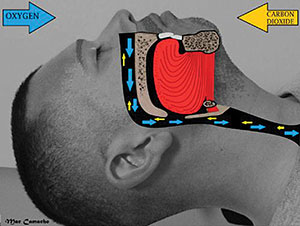 The photo at left shows an individual with normal anatomy (no airway obstruction). Oxygen and carbon dioxide can easily flow into and out of the airways to the lungs.

When individuals with OSA lie down to sleep, the soft, movable tissues (palate, tongue [shown in red] and epiglottis) fall backward and create an obstruction to the free-flow of oxygen and carbon dioxide. The brain senses the fall in oxygen and the rise of carbon dioxide. The brain protects itself by waking up the individual so he or she can change positions and resume the normal flow of air. These abrupt awakenings can occur many times per hour; they disrupt the architecture of sleep so the individual does not experience a restful, restorative night’s sleep. As a result, OSA sufferers often complain of fatigue and excessive sleepiness during their waking period.

Untreated or inadequately treated OSA does much more than just make people feel tired. Rather, OSA has been associated with such serious health conditions as heart disease, stroke, high blood pressure and diabetes.

Following are risk factors for OSA:

Individuals with multiple risk factors should undergo a sleep study (polysomnogram) to screen for the presence of OSA. The polysomnogram records several bodily functions during sleep and may be performed in home or at a sleep center. 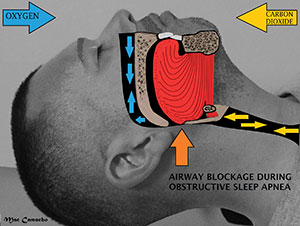 The most popular treatment for OSA is continuous positive airway pressure, also known as CPAP. A CPAP machine increases air pressure in one’s throat so that the soft tissues of the airways do not collapse when one breathes in. Many OSA sufferers describe their CPAP machines as a miracle treatment, and they would not think about going to sleep without wearing the devices.

For those intolerant of CPAP, weight loss is frequently an option. Excessive weight in the upper body places undue strain on the soft tissues of the head and neck. However, employing weight loss as the treatment of choice is a slow, difficult process, and there is no guarantee of success.

What is an employer to do?

A sleepy employee working with or around dangerous machinery is an accident waiting to happen. If the employee requires a DOT card to perform his or her job, the employer should rely on the DOT examiner to screen the driver for OSA. For a driver with an established history of OSA, the DOT examiner will verify that the treatment is adequate.

Some employment situations may involve individuals who work with hazardous materials and require respirator clearance. These individuals may fall under one or more of the various OSHA standards, for example, the OSHA Respiratory Standard (29 CFR 1910.134), the OSHA HAZWOPER Standard (29 CFR 1910.120), and the OSHA Asbestos Standard (29 CFR 1910.1001). For details, go to www.osha.gov. OSHA Standards generally require baseline examinations and some sort of follow-up medical surveillance. It behooves the employer to develop a good working relationship with the medical examiner(s) who will be performing these OSHA-mandated exams. With active dialogue, the employer may alert the medical examiner(s) to specific as well as general concerns regarding OSA.

It is interesting to note an emerging trend: some employers are taking a proactive approach and are now screening employees for OSA. These programs come in different forms. For example, some programs screen all employees while others screen only high-risk employees. Some programs are optional while others are mandatory. The commonality is that the employer pays for the screening and usually the treatment.

At first glance, this may seem like a costly endeavor. However, several employers have estimated that the costs will be more than outweighed by the benefits. In 2011, a large Florida corporation screened 608 high-risk employees for OSA. Out of this group, 319 were diagnosed and treated for OSA. The cost of the screening and treatment was estimated to be $7.2 million over a ten-year period. In terms of lost productivity alone, it was estimated that the corporation would net a savings of $136 million over that same ten-year period.

Undiagnosed and inadequately treated OSA poses a health risk to the employee as well as a safety risk when that employee reports to work. Screening for OSA is not only good for the employee, but it is also good for business.

6. Cost of decreased cognitive function in a large corporation in Florida: benefits of obstructive sleep apnea screening and treatment for high-risk professionals. http://www.aasmnet.org/articles.aspx?id=2309

Dr. Brian T. Morris, MD, JD, MBA, MPH, is an occupational medical physician and Associate Corporate Medical Director, AllOne Health. He was selected as one of only three physicians in the country to sit on the advisory board for the DOT Federal Motor Carrier Services Administration (FMCSA) and has served as the State Police Surgeon for the Massachusetts State Police for 20 years. Dr. Morris has over 30 years of experience as an occupational health physician and has been with AllOne Health for over 22 years.