Hazardous air pollutants — or compounds known to cause cancer and other serious health problems — can pose serious worker safety concerns for industries that use or manufacture chemical and petrochemical products. The scale of the monitoring need is far-reaching and often includes industries such as automotive, medical sterilization, agricultural, chemical manufacturing, semiconductor and pharmaceutical, just to name a few.

Today, many industrial facilities use a variety of gas analyzer technologies to monitor for hazardous air pollutants whose levels are often regulated down to parts per million (ppm) because of long-term exposure risks. As more health data become available, regulated exposure limits continue to decline driving monitoring levels into the parts-per-billion (ppb) where few technologies are up to the task. This is especially true when adding in the natural presence of ambient air moisture and other chemical compounds that can not only mask the desired measurement but in some cases create false positives.  All of which can prove to be devastating in a factory environment.

Take ethylene oxide (EtO), for example. A colorless gas at room temperature, the compound is widely used as a sterilizing agent for medical equipment and cosmetics. It’s also used in the production of a wide range of products, including antifreeze, pharmaceuticals and detergent, just to name a few. As a very toxic carcinogen, EtO has received a lot of attention as of late with new regulations requiring emission monitoring down to single digit parts per billion. And because EtO is easily concealed by high levels of air moisture, getting fast, accurate measurements in real-world environments can be challenging even at ppm levels. Manufacturers of EtO have the added problem that the far less toxic chemical ethylene, from which EtO is a derivative, can easily produce false EtO positives and result in the shutdown of the entire facility.

So, what should a manufacturer look for when measuring low-level hazardous air pollutants in ambient air? Here are five tips for choosing a trace gas analyzer system that meets the challenges of real-world factory environments:

1. Make sure your technology works in the factory and not just in the laboratory.

As one of the first analytical measurement technologies a chemist is introduced to, gas chromatography (GC) has been the go-to gas analysis instrument for laboratory chemists since, well forever. However, GC can have a number of serious drawbacks. The most obvious is the time it takes to make a single measurement. In a factory environment, upsets need to be known when they occur, and with a common 10–15-minute measurement time for trace gases, gas chromatography can not only underreport the severity of the event, but it can also miss it altogether. The speed issue is particularly noticeable when multiple sample points are multiplexed through the same instrument, and hours could pass before high-level emission has been properly detected.

GC can also suffer from false detections when closely related compounds are present. Like the EtO, false detection of a dangerous compound can mean having employees shelter in place for hours while the threat is analyzed for a false positive.

Fortunately, the drawbacks of GC can be mitigated by using optical-based technologies that work in near real-time. One such technology is Fourier transform infrared (FTIR) spectroscopy. With measurements made in a couple of minutes or less, FTIR and its newly developed cousin optically enhanced FTIR (OE-FTIR) are not only fast but are also difficult to fool. The reason for this is that FTIR looks at a very wide spectrum and can therefore identify multiple compound spectral lines at once, leading to a dramatic increase in detection accuracy when interfering compounds are present. 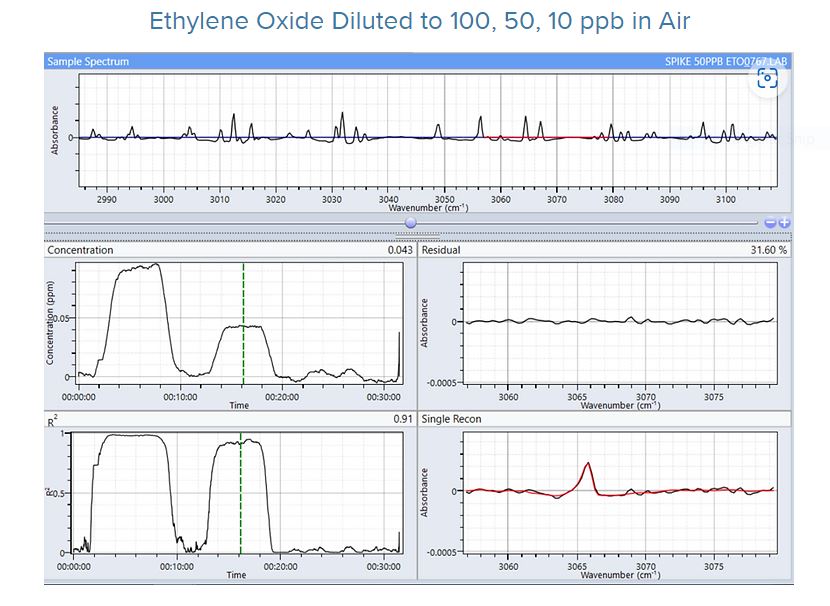 The best gas analyzers use optically enhanced FTIR (OE-FTIR) spectroscopy that can detect harmful air pollutants such as ethylene oxide down to the parts-per-billion and even the parts-per-trillion levels.

2. Ensure your gas analyzer is sensitive enough to measure compounds at levels below the permissible exposure permit.

While FTIR has always been a solid performing technology in terms of speed and qualitative results, it has historically lacked low-level quantitative measurement capability. However, over the last few years, FTIR has made a dramatic technological leap forward with the creation of optically enhanced FTIR or OE-FTIR. This technology now routinely provides detection limits in the single-digit ppb range and, in some cases, parts per trillion (ppt). So not only can one measure well below the regulated exposure limits yielding more confidence in accuracy and precision, but you also gain the typical advantages of FTIR like speed, resilience to interferants, and the unique benefit of not having to calibrate.   OE-FTIR and FTIR are completely factory calibrated and never require field calibration which is significant in the total operating costs and ease of use for the instrument. 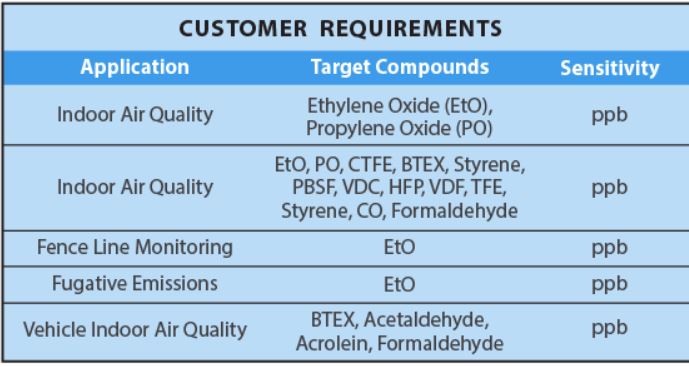 Today, the permissible exposure limit for many harmful air pollutants is at a parts-per-billion concentration.

3. Get a system capable of measuring many different classes of compounds at one time.

In our discussion of GC technology, we mentioned the speed of measuring a compound. Now imagine we want to measure five or a hundred compounds at once. And what if we don’t know the mix of those compounds ahead of time? Like a sentry at the gate, FTIR and OE-FTIR are constantly measuring at a broad spectrum. That information is saved every few seconds and can be used to report on multiple compounds without any deterioration in speed. Want to go back in time and look for compounds that you initially did not suspect to be present? No problem: the data can be easily reprocessed for any compound in the extensive library. The multi-compound and forensic capability of FTIR make it unique among available analytical technologies.

4. Purchase a solution, not a bunch of components.

To this point, we have focused on analyzer technologies, but there is much more to making robust trace measurements, especially in ambient air. In fact, choosing an analyzer technology, while very important, only gets you halfway to a complete solution. The balance involves five other important factors: sampling, conditioning, automation, data input/output, and integration—a few words on each.

Sampling involves more than just the pumping in ambient air. Sampling systems often need to be thermally controlled along their entire path to prevent compounds of interest from sticking to their surfaces. The sampling system should also contain a large number of individual channels to increase the sampling area while not creating the need for multiple systems that drive up deployment costs. This, of course can only be reasonably achieved if the individual sample time is small as previously discussed

Conditioning of the sample by use of technologies such as thermal oxidizers and auto reference algorithms can virtually eliminate the effects of changing ambient air conditions that can lead to measurement drift over time. In changing high-humidity environments, this level of control is an absolute must.

Most ambient air systems are expected to operate continuously. As such, seamless automation is the difference between instruments that need attention every day and those that can go months on end without user intervention. The automation also needs to be flexible enough to change not only the compounds of interest but also how those compounds are sampled, reported, and alarmed when out of range.   The key here is flexibility designed for the factory and not the laboratory.

Factory analyzers rarely operate on their own—the need to be integrated into control rooms and data capture systems using recognized industrial protocols. Even the most capable analytical system is of no use if it cannot meet reporting requirements.

Purchasing a purposely designed integrated system is the key to long-term user satisfaction and getting a measurement you can count on. Just like one would never build a car by buying all the parts separately, analytical systems measuring low-level trace compounds need to be designed as a system.

5. You will have questions, make sure your instrument supplier can provide more than equipment

Behind every great analytical instrument are analytical chemists, application engineers, and service staff with deep real-world knowledge. You should expect that compound-specific methods, safe area deployment and data validation are all areas your equipment provider can support. Training, service, and post-sale support should also include analytical support since real-world environments can sometimes produce unexpected results that need data validation.

By choosing the right trace gas analyzer system, companies can confidently protect their workforce while reducing the total cost of ownership when replacing older GC equipment with modern technologies like OE-FTIR. With the right equipment, users should expect many years of trouble-free service and technology that can adapt to future needs.

John Stack is Senior Director of Gas Analysis Solutions at Thermo Fisher Scientific, where his group have led the development of EO-FTIR technology and system-level solutions for industrial gas analysis. Mr. Stack served as CEO of MAX Analytical Technologies from 2017 to 2022, when the company was purchased by Thermo Fisher Scientific. He also served as president of ZYGO Corporation’s Optical Systems Division and president and COO of Edmund Optics. Mr. Stack earned a B.S. in physics at the University of Pittsburgh and attended The Wharton School’s Executive Development Program.