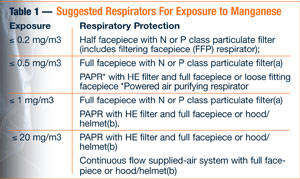 Respirable particles are generally less than 4 micrometers (µm) in diameter, which includes welding fume. These particles can penetrate and be retained deep in the lungs. In addition, a TLV-TWA of 0.1 mg/m3 was added for inhalable manganese (particles less than 100 µm in diameter).

The respirable limit would be appropriate for evaluating tasks such as welding. The inhalable limit would be more appropriate for larger particle-generating tasks such as grinding. As many welders do both tasks, separate samples for each limit may need to be taken for a full exposure evaluation. Documentation is available from ACGIH® for manganese and its revised TLVs®.(3) These limits are being set to reduce potential for central nervous system impairment.

The current federal OSHA permissible exposure limit (PEL) for total manganese, including welding fume, remains unchanged at 5 milligrams per cubic meter of air (5 mg/m3).(2) In contrast to the TLVs, this PEL is a ceiling limit, which means the worker’s exposure shall, at no time, exceed the PEL — even instantaneously. While the TLVs are recommended good practice, the PELs are regulatory limits and must be complied with. States enforcing their own occupational safety and health programs may have different regulatory exposure limits from federal OSHA.

Manganese is a grey-white metal used to produce a variety of important alloys and as a deoxidizing agent in weld wire to remove iron oxide from the weld pool. Welders and surrounding workers such as welding helpers can be exposed to manganese fume and dust during welding, grinding and other metalworking operations. Repeated, excessive exposure to manganese may cause manganism, also known as welder’s disease. Signs and symptoms of manganism include: weakness/lethargy, speech and psychological disturbances, paralysis and tremors.

Exposure data from shipyard workers indicates that the highest exposures to manganese fume come from shielded metal arc welding (SMAW), flux core arc welding (FCAW) and gas metal arc welding (GMAW).(5) The percentage of manganese in the welding rod or wire can significantly affect the content in the welding fume. Manganese content can range from less than 5 percent up to 15 percent in hard-facing applications. Safety Data Sheets (SDS) for the rods and wires can be used to determine manganese content.

Numerous studies indicate that welder exposure to manganese frequently exceeds the previous TLV® of 0.2 mg/m3 — ranging up to almost 25 times the obsolete TLV®. The Center for Construction Research and Training Chart Book(6) has a table showing the probability of the following construction trades being exposed to manganese above the now obsolete TLV®:

In addition to welders, welder helpers and other nearby workers may also have significant exposure. These studies, using the old TLV® for assessment, indicate a definite need for employers to reassess their workers’ exposure in light of the revised TLV®s.

Consult ANSI Z49.1:2012 Safety in Welding Cutting and Allied Processes for general welding safety recommendations. OSHA requires all feasible engineering controls be used to reduce worker exposure. Portable local exhaust units are one option.(4) Changing welding methodology may be another option. GMAW (or MIG) tends to produce less fume per unit of weld metal than SMAW (or “stick”). However, due to the increased efficiency of the wire-fed process, GMAW may equal the fume per unit time from SMAW.(5)

In many cases, engineering controls alone may not reduce exposure levels below the exposure limit. Respiratory protection can be used to provide the needed worker protection. Select respirators based on results from an exposure assessment (e.g. air sampling, historical data) and the assigned protection factor (APF) as established in OSHA’s respirator standard 29 CFR 1910.134. Consider consulting a certified industrial hygienist (CIH) for help in exposure assessment and respiratory selection.

With careful exposure assessments, selection and implementation of engineering and personal protective equipment controls, contractors and welders can significantly reduce the occurrence of manganism and other manganese-related diseases in the workforce.

Don is the technical services representative specializing in construction for 3M Company (www.3M.com/OccSafety). He has over 20 years experience working directly with ENR 400 construction contractors across the country. Don is a Fellow of the American Industrial Hygiene Association and past-president of the AIHA Construction Committee. Phone: 1-800-243-4630.
Subscribe For Free!
More Videos