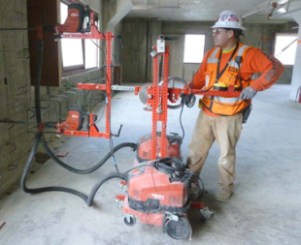 OSHA is pointing to an innovating new concrete drill jig developed by a University of California ergonomics team as a means of limiting worker exposures to respirable crystalline silica, as well reducing fatigue and risk of musculoskeletal injuries.

The jig can drive multiple large hammer drills at different angles and heights, and is mounted on a base that allows it to move easily around a construction site. A vacuum collects dust generated by the drill bit.

When Freddy Urias goes home at the end of a long work day, he's not dead on his feet, and he's no longer worried about potentially deadly silica exposure on the job.

A foreman with the Laborers' International Union, Urias hasn't always felt this way. With past jobs, he says, silica dust was all over, "all over your clothes, all over your body. You were breathing it," or he says he had to wear a mask to avoid breathing it.

But his work now on the renovation of an historic building in San Francisco lets him go home cleaner, safer and much less tired so he can enjoy more time with his kids.

Urias isn't the only one benefitting from the use of the drill.

“We listened to the feedback”

"The idea to put a drill on the end of a pole has been around for a while," says David Rempel, MD, director of the Ergonomics Program at UC Berkeley. He and his teammate Alan Barr, Principal Development Engineer, designed the jig.

"The current design is successful because we listened to the feedback from the many construction workers who used earlier designs," Rempel says. "We tackled drilling into concrete because plumbers, electricians and laborers report that is one of the most fatiguing and injury prone tasks that they do."

By all accounts, the drill jig is a big success, proving to be highly effective in reducing risk of severe exhaustion, musculoskeletal disorders and potentially deadly silica exposure – a winning trifecta for scores of grateful workers. It also increases productivity – a bonus that makes it equally popular with management.

The story of the drill jig starts nine years ago with a grant from the Center for Construction Research and Training, located in Silver Spring, MD, just outside Washington, DC. Rempel and Barr first created an inverted drill press for small hammer drills that reduces the extreme stress and strain of overhead operations.

They put their prototype to a real-world test drive on 10 commercial construction sites and found it reduced awkward postures and shoulder, arm and back fatigue. Now, a commercially-available version of the inverted drill press is being built and sold by a company in North Dakota.

Vibration goes to tool, not back to worker

With the overhead drill design under their belts, team members turned their sights on horizontal drilling with large hammer drills weighing 10 to 25 pounds. They increased the jig's weight and put it on a heavier base, allowing multiple drills to operate simultaneously without risk to the worker. The adaptation also transfers the drill's vibration to the tip of the tool, rather than sending it back to the operator for increased drilling speed.

Variations of the drilling jig have successfully been used by contractors on major projects such as several San Francisco Bay Area Rapid Transit construction sites.

The new version – which looks a little like R2D2 with a hose and bit – is especially handy for drilling large holes needed to secure rebar or large anchors into concrete. It comes with an added benefit.

"Collecting dust with the jig makes sense. All the dust collection equipment – vacuum, hoses, shroud – can be carried by the jig," Rempel says.

It's also a boon to McCarthy Building Company, Inc., which is renovating the historic building in downtown San Francisco. In earlier days the drab, gray structure was used for assembly of tanks during World War II and later as a post office.

McCarthy is totally retrofitting the eight-story building not far from the city's storied Embarcadero. The work involves removal of interior walls, lots of heavy drilling, and pouring new concrete.

"The advantages to the way we are approaching our drilling of over 40,000 holes drilled in the existing concrete structure are numerous," says Shannon Kelley one of McCarthy's onsite superintendents on the project.

Workers no longer drilling on their knees

He points out that workers have gone from drilling on their knees, reaching overhead and working on different scaffolds and platforms to standing upright and drilling more safely. Kelley also notes the vast improvement in silica dust exposure.

"We used to have different types of cups, shrouds and covers trying to vacuum the dust that was being created from the drilling operation so the worker did not ingest it," he says. "This new system does the vacuuming through the drill bit, keeping all the silica dust contained. The system works so well the operator does not have to wear any type of respirator."

Urias puts it this way:  "Silica dust is not getting on your clothes; it's not getting your face, or your skin, getting in your pores," he explains. You're not breathing it in the air. Basically, it's dust free."

Testing bears out his assessment. The UC team measured respirable silica dust levels when a laborer drilled into concrete using a pneumatic rock drill by hand and also drilled with the jig that captures the dust. With the usual power tool held by hand for drilling, the silica dust levels were 14 times higher than the recommended exposure limit set by the National Institute for Occupational Safety and Health. But with the jig and dust-capturing device, the level is below the recommended exposure limit.

Rempel says the jig is working well and construction workers like it, especially when there are a lot of holes to drill as is the case with the San Francisco project – the first large-scale venture to use the new jig. A nearby company is now building and marketing the jig.

"This is one of the most successful research projects we have worked on," he says. "Workers have told us that they used to go home dead tired. But with this device, they can work all day and still have energy to be with their families. That kind of feedback makes it all worthwhile."

For more information on the UC Ergonomics program, go to: ergo.berkeley.edu