Safety success can be scary 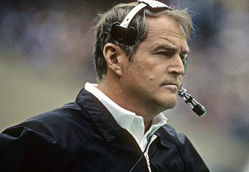 A great leader has passed, Chuck Noll, Hall of Fame coach of the Pittsburgh Steelers. Coach Noll impacted the lives of many, many people. Chuck Noll is the only NFL head coach to win four Super Bowls and may be the greatest NFL coach ever. Noll never received the credit he truly deserved but those closest to him realized that he had exceptional leadership qualities.

In local press coverage, former players and those from the Steelers’ front office knew how focused and businesslike Chuck Noll could be. He never held on to the past for very long – be it success or failure. He quickly moved to the next challenge through hard work, preparation, and planning.

Chuck Noll was also recognized as brilliant in ways outside of football and had a penchant for learning. He was often asking, probing, and absorbing more. His predilection for learning as a teacher made him a better coach and leader of young men. He also knew that success could be the great enemy – it brought about complacency and comfort. Not good in the NFL. Not good when it comes to ongoing safety improvement.

We can learn a great deal from leaders like Chuck Noll.

Four Reasons Why Success in Safety Is Scary

1. Lagging indicators such as recordable and lost-time rates can make some leaders too comfortable and allow their front-line leaders and their workers to slip into a danger zone, both mentally and physically. As a small component within any culture for safety, lagging indicators should not be the primary metric within an organization that allows us to feel good for any length of time. Proactive safety metrics need to be the primary indicators that help to set your path forward and plan accordingly.

2. Success brings about a false sense of security and pride for some supervisors and workers and they lose their daily focus, especially when it comes to the basics, the “little things,” such as using the right PPE, materials, tools, equipment, procedures, and people for the task. Great companies ensure that their workers come to play every day – that means paying attention to “the little things” which are really the “BIG Things,” when all is added up.

3. Workers don’t take their typical timeouts and communicate with each other in order to adjust to changes in the environment and work activities so they can mitigate respective hazards. Success has a way of creeping in and allowing some individuals to feel that “corrections and adjustments” don’t really need to be made and the job will get done without problems, issues, and accidents, so why slow down?

4. Standards of performance in your culture for safety have to be set and kept, each and every day. When we embrace some degree of perceived success for too long, we get soft, and allow standards to drop. A little housekeeping issue left unattended, a visitor walking by without PPE, or not communicating a clear safety concern in a timely manner. All of these issues reveal that our sense of urgency and standards for safety may be slipping. Yes, success will do that too!

Great leaders in great organizations don’t wallow in their safety achievements for too long. Great coaches and great leaders like Chuck Noll know that being too comfortable with one's success and enjoying prolonged celebrations get in the way of sustainable excellence. And who can argue?

Gerry Dulac of The Pittsburgh Post-Gazatte stated, “Success was never a destination for Chuck Noll. It was not a road that had an ending, rather always a new beginning. It was a journey, a path that never allowed for complacency or made room for satisfaction.”

David J. Sarkus is the President and Founder of David Sarkus International, a leading health and safety management consulting and training firm. He has nearly 30 years of occupational health and safety management experience in large, diversified industrial settings. David and his colleagues have been helping others apply leading-edge strategies and tactics over the last two decades. Customized safety interventions have produced reductions in key performance indicators from 35% to over 85% from the previous year. These kinds of results are both scalable and sustainable. David holds a Master of Science in Safety Management from West Virginia University and a Master of Science in Industrial Psychology from St. Mary's College of California. He is a Certified Safety Professional (CSP) by examination. Visit https://davidsarkus.com/