From Work in Progress, official blog of the DOL

Think child labor is a thing of the past? 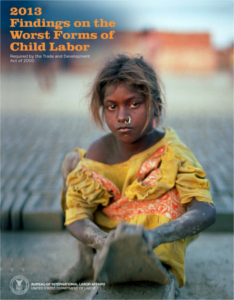 This morning, Secretary of Labor Thomas Perez announced the release of the department’s “Findings on the Worst Forms of Child Labor” report. The report is prepared annually by the department’s Bureau of International Labor Affairs, and it assesses efforts by more than 140 countries to eliminate the worst forms of child labor. As Secretary Perez stated in his remarks, the report “shines a light on children around the globe who are being robbed of their futures; who spend their days and often their nights engaged in some of the most grueling work imaginable.” The report also suggests actions countries can take to help vulnerable children around the world find a better future.

Below are five facts about child labor globally that we can learn from this report.

1. A staggering number of children around the world are working in deplorable conditions.

There are at least 168 million child laborers worldwide, of which 85 million are in hazardous work. That’s equivalent to the entire population of Australia, Germany and the United Kingdom. That’s one out of every ten children, waking up every day not to sit in a classroom with a book and a teacher and a sense of optimism…but preparing to do some of the most dangerous jobs there are.

2. Child laborers toil in a vast range of industries.

Child labor is not limited to a handful of dark corners of the global economy. For each of the 143 countries covered, the report presents findings on the nature and prevalence of child labor. Child labor occurs in agriculture, construction, mining, manufacturing, textile production, and other sectors. The report also identifies instances where children are engaged in the “worst of the worst” forms of child labor: chained to looms to weave carpets, kidnapped to fight adult wars, mandated to leave school to pick cotton, or lured and sold to brothels.

3. Child labor does not only harm children and families; it limits economic growth.