Facts you need to know about ticks 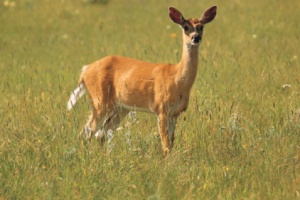 10. Ticks crawl up Ticks don't jump, fly, or drop from trees onto your head and back. If you find one attached there, it most likely latched onto your foot or leg and crawled up over your entire body.

9. All ticks (including deer ticks) come in small, medium and large sizes

8. Ticks can be active even in the winter That's right! Deer Ticks in particular are not killed by freezing temperatures, and will be active any winter day that the ground is not snow-covered or frozen.

7. Ticks carry disease-causing microbes Tick-transmitted infections are more common these days than in past decades. With explosive increases in deer populations, extending even into semi-urban areas in the eastern and western U.S., the trend is for increasing abundance and geographic spread of deer ticks and Lone Star ticks; and scientists are finding an ever-increasing list of disease-causing microbes transmitted by these ticks: Lyme disease bacteria, Babesia protozoa, Anaplasma, Ehrlichia, and other rickettsia, even encephalitis-causing viruses, and possibly Bartonella bacteria. Back in the day, tick bites were more of an annoyance but now a bite is much more likely to make you sick.

6. Only deer ticks transmit Lyme disease bacteria The only way to get Lyme disease is by being bitten by a deer tick or one of its "cousins" found around the world.

4. Deer tick nymphs look like a poppy seed on your skin And with about 1 out of 4 nymphal deer ticks carrying the Lyme disease spirochete and other nasty germs in the northeastern, mid-Atlantic, and upper mid-western U.S., it's important to know what you're really looking for. They're easy to miss, their bites are generally painless, and they have a habit of climbing up (under clothing) and biting in hard-to-see places.

3. The easiest and safest way to remove a tick is with a pointy tweezer Using really pointy tweezers, it's possible to grab even the poppy-seed sized nymphs right down next to the skin. The next step is to simply pull the tick out like a splinter.

1.Tick bites and tick-borne diseases are completely preventable There's really only one way you get a tick-transmitted disease and that's from a tick bite. Reducing tick abundance in your yard, wearing tick repellent clothing every day, treating pets every month and getting into a habit of doing a quick body scan are all great actions for preventing tick bites.

What you need to know about PELs

What you need to know about synthetic marijuana

What you need to know about food recalls