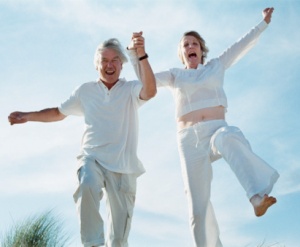 Two researchers at University College London looked at the responses of about 6,500 men and women who answered the question, “How old do you feel you are?” The respondents were age 52 and older, with an average age of 65. Their answers:

Eight years after study participants answered the age question, researchers determined which ones were still alive:

“Feeling younger or older itself seems to have an effect on our health,” said Dr. Ronald D. Siegel, assistant professor of psychology, part time, at Harvard Medical School.

He said there are several ways that feeling younger psychologically might lead to better health. One is exercise. Good health is associated with 150 minutes of moderate-intensity physical activity each week.

Another approach might be attitude about diet. Treating food with an “I won’t live much longer, I might as well enjoy this” attitude could lead to unhealthy eating. A future-focused orientation can lead to eating with future health in mind.

Challenge yourself to try new things, learn new ideas, and develop new skills. Realize most human abilities follow a “use it or lose it” pattern.

Focus on something larger than yourself. Connect with people close to you or help improve the lives of others. Commit yourself to a hobby, such as gardening, attending the theater, dancing, or reading. “When our focus is just on our own immediate pleasure or pain, we’re much more likely to have difficulty with the aging process,” said Dr. Siegel.