Contagion: Not just a Hollywood movie? 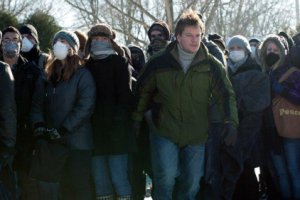 Infectious disease and disaster preparedness experts at Johns Hopkins Medicine say the premise of a new Hollywood movie should serve as a reminder that the United States needs to be prepared in case a fast-spreading deadly virus causes a serious national emergency.

The Department of Homeland Security list pandemic and plague as one of 15 likely national emergencies that the United States should prepare to respond to in its Catastrophic Disaster Planning document.

Although the movie may take some dramatic license with regard to how a lethal virus might spread, Gabor Kelen, M.D., director of the Johns Hopkins Office of Critical Event Preparedness and Response, said it spotlights the fact that hospitals, health care workers and public health agencies will be on the front lines of a major deadly disease outbreak. Thus, they should be well trained and prepared to respond.

Kelen, who has published a number of scholarly research papers and editorials on hospital surge capacity and disaster planning, says that although medical institutions are much better prepared than a decade ago, a great deal of work remains to effectively prepare and respond to a rapidly spreading lethal virus that would tax all resources. Capacity restraints and the ability to isolate infectious patients are major concerns. In addition, doctors and other health care workers need a clear set of policies to help make urgent ethical decisions to allocate equipment, medicine and manpower during a major disaster with potentially large numbers of affected patients, says Kelen, who is also a professor and the director of the Johns Hopkins Department of Emergency Medicine.

The country also needs a dedicated discipline of knowledgeable and well-trained scientists to test different policies and practices and determine how best to ready for future catastrophic events, says Kelen. He is heading up an effort to launch a new professional society dedicated to disaster medicine.

Trish Perl, M.D., M.Sc., a leading epidemiologist and infectious disease expert and a professor in the departments of Medicine, Pathology and Epidemiology at Johns Hopkins, says the movie, which debuts Sept 9, starkly reminds us that global pandemics do occur and can result in enormous casualties. The Spanish Flu of 1918 killed an estimated 50 million worldwide.

Perl, the author of a number of research papers on flu transmission and prevention, says more work needs to be done to determine the best practices for preventing the spread of emerging new infections, especially among health care workers who are often on the front lines of a deadly disease outbreak, such as SARS or Swine Flu.

Developing such effective practices, Perl says, will ensure that the health care workforce isn’t decimated by a deadly new virus and will be able to respond adequately to those in need.